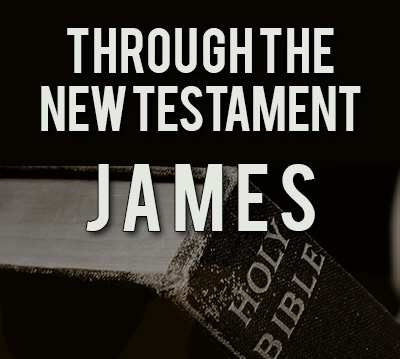 One of the things I really love about the book of James is that it doesn't end. By that I mean that James is sharing hard truth and calling for clear application until his very last word. James has a lot to say and packs it into five brief chapters. For me, the most moving part of chapter 5 is when James describes the return of his big brother.

In words that sound very much like an Old Testament prophet, he cries out against the exploitation of the poor and says, "The cries of the harvesters have reached the ears of the Lord of hosts." Echoing Isaiah and Jeremiah, he warns them, "You have fattened your hearts in a day of slaughter." James then turns his attention to those who are suffering with words of comfort for the righteous and terror to the oppressor.

(5:7-8a) Be patient, therefore, brothers, until the coming of the Lord. See how the farmer waits for the precious fruit of the earth, being patient about it, until it receives the early and the late rains. You also, be patient.

There is coming a day when every wrong will be righted.  In light of that day, James calls for patience.

(5:8-9) Establish your hearts, for the coming of the Lord is at hand. Do not grumble against one another, brothers, so that you may not be judged; behold, the Judge is standing at the door.

Eugene Peterson writes: Jesus not only got us started in this life of faith; He's also our goal. He's our destination. And that future goal influences every moment of our present.

People who have a compelling goal don't quit. Their lives are filled with meaning and hope and energy. If they lose their goal, they meander, they get discouraged, they give up. And James knew this, which is why James wrote, "Be patient… Stay steady and strong. The master could arrive at any time."

Bobby was born and raised in Atlanta, GA. He is the youngest of 13 children and was the first believer in his family. He graduated from Columbia Bible College and served in churches in North & South Carolina before coming to Texas in 1994. Bobby and Amy have been married since November of 1990 and have 3 children (Riley, Beau, and Emma Grace).