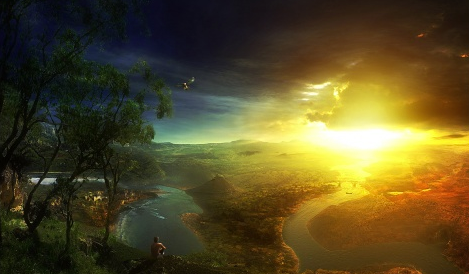 So, who wins? It is a question we all want answered, and usually before the game/battle/war/conflict has begun; who will win? Some will back the underdog; most want to be on the winner's side, especially when the outcome is going to be personally affecting you.

Revelation 17, like most of Revelation, is difficult to understand. An angel tries to give John some help with the visions he sees here, "I will explain to you the mystery...". The explanation isn't all that clear, but the mist clears a bit in verse 14, and gives us the bottom line:

"They will make war upon the Lamb (Jesus), but the Lamb will overcome them because He is Lord of lords and King of kings - and with Him will be His called, chosen and faithful followers"

So there it is. The battle is won by the Lamb. No guessing, no wondering. And those He called, those he chose (His church) will be there with Him.

As we reflect on the Christmas season, take time to celebrate and marvel that 2000 years ago the fate of the world was sealed, in a lowly manger. The Lord of lords, King of kings was born. Born to win. There are battles still to come, but the war is won.

Are you on the winning side? He is calling you today. Accept His invitation, become a "faithful follower", and be a victor. The prize is to spend eternity with Him.

Thank you Lord of lords, King of kings, that you care enough about me to personally chose and call me. Thank you that the outcome is decided. Help me to be a faithful follower of you today, and always. Amen

Rob and his wonderful wife Helen were born in England, married in 1987. They moved to the USA in 1996, where they have lived since in California, Massachusetts, and Texas. They have 6 lovely children, Sarah, Claire, Nic, Laura, Jacqueline and Victoria, all of whom were homeschooled. Rob gave his life to the Lord in 1987, at the same time that Helen rededicated herself. Rob has been on a number of mission trips to Costa Rica, has led vacation Bible schools, soccer ministry, small groups, children’s and youth ministry, acted as lead program manager during the Hutto church plant, and is currently Chairman of the board of Directors at Camp Wilderness Ridge. Rob works at the Sears Call Center as Director of the Technical Solutions Group. Helen is an experienced homeschool mom, and is involved in children’s and small group ministry.

How good is your memory?

To Believe or not to Believe

A Little Self Examination

Running the race - to win